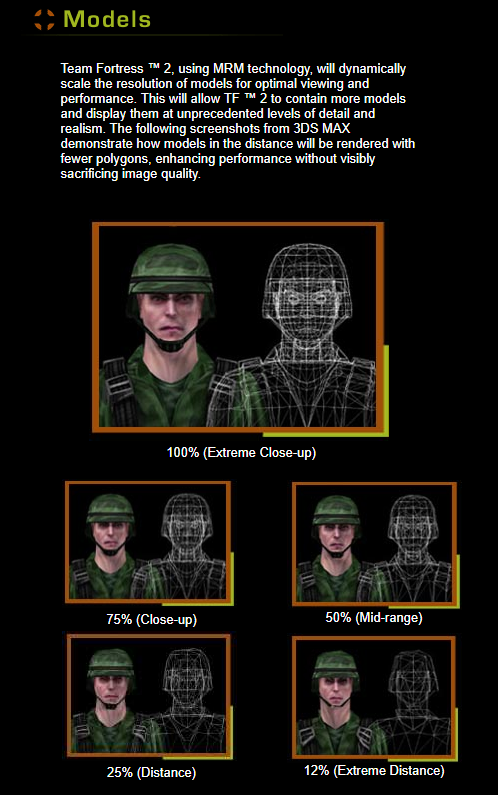 From the Team-Fortress 2 website, 1999. In 1999, a big part of Valve's marketing for Team-Fortress 2 was that it would have much higher quality models than Half-Life, but could still run smoothly on computers that met Half-Life's specs. This would be achieved through Intel's "Multi-Resolution Mesh" (MRM) technology, which would allow the game to render lower quality versions of the models at longer distances. This is called "Level of Detail" or LOD. In Half-Life, Valve stored uncompiled model data in files called .smd, which only allowed for a single mesh per file. To use Intel's MRM technology, they developed a new format called .vrm.

The VRM format was introduced shortly after the release of Half-Life, and was simply an upgrade to the existing SMD format to allow for multiple meshes with LOD support. SMD was thus named "version 1" and VRM "version 2." Valve also produced plugins for 3D Studio Max that allowed modelers to export their work into the VRM format. These plugins leaked in 2003 along with Half-Life 2, and can still be used to create VRM files. But for reasons unknown (possibly due to licensing issues), the format was phased out around 2001 and Valve returned to the SMD format. The LOD support that the format originally offered was then accomplished in a different way, by using multiple SMD files instead of one VRM file.

However, Valve never removed VRM support from their modeling tools. There are still references throguhout the code, including this comment from Valve's model compiler tool, circa 2007:


Theoretically, any Source Engine game will support the VRM format when making models for it. The plugins exist, and the support in the model compiling tool exists. But the format was not fully fleshed out, and is generally more tempermental and buggy than SMD. Regardless, you can download the 3DS Max plugins here.